﻿﻿ ﻿﻿ Accident Boeing 737-3L9 D-ADBC, 18 Oct 1996
Home » ASN Aviation Safety WikiBase
ASN Wikibase Occurrence # 188186
This information is added by users of ASN. Neither ASN nor the Flight Safety Foundation are responsible for the completeness or correctness of this information. If you feel this information is incomplete or incorrect, you can submit corrected information.
Tweet
Narrative:
Sustained substantial damage to left outer wing on 18-10-1996 whilst parked at Stand 56L, London-Gatwick Airport, Horley, Surrey when hit by a supply truck. No injuries reported to the 6 crew and the 80 embarked passengers (a further 40 were waiting to embark). According to the following extract from the official AAIB report into the accident:

"At the time of the accident, the aircraft was parked on Stand 56L at the London Gatwick's North Terminal, with approximately 80 passengers on board the aircraft and a further 40 passengers standing within the boarding jetty waiting to board. The cabin crew were in their boarding positions and the commander and first officer were on the flight deck.

The aircraft had already been cleaned and catered and the refuelling bowser, having just completed the refuelling, was in the process of disconnecting its refuelling hose from beneath the aircraft's right wing. A Boeing 737-200 was parked on Stand 57R adjacent to and slightly forward of the subject aircraft's left wing.

In doing so his vehicle proceeded outside the painted white guidance lines and collided with the left wing of the 737-300. The aircraft commander felt the impact, pushed passed the boarding passengers in the jetty, and viewed the scene from the jetty's external steps. As there was no immediate danger, the passengers were instructed to de-plane and return to the lounge via the jetty.

After the incident the fire service cut the vehicle's body work to release it from the aircraft, and moved it clear pending AAIB investigations. Photographs, however were taken of the vehicle's position after impact before it was moved." 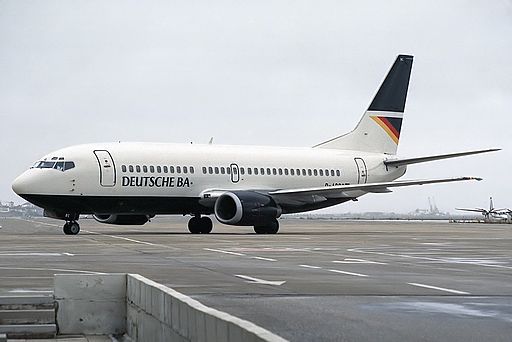