﻿﻿ ﻿﻿ Accident Osoaviakhim-1 hydrogen balloon Sirio, 30 Jan 1934
Home » ASN Aviation Safety WikiBase
ASN Wikibase Occurrence # 195494
This information is added by users of ASN. Neither ASN nor the Flight Safety Foundation are responsible for the completeness or correctness of this information. If you feel this information is incomplete or incorrect, you can submit corrected information.
Tweet
Narrative:
Osoaviakhim-1 was a record-setting, hydrogen-filled Soviet high-altitude balloon designed to seat a crew of three and perform scientific studies of the Earth's stratosphere. On January 30, 1934, on its maiden flight which lasted over 7 hours, the balloon reached an altitude of 22,000 metres (72,000 ft). During the descent the balloon lost its buoyancy and plunged into an uncontrolled fall, disintegrating in the lower atmosphere. The three crew members, probably incapacitated by high g-forces in a rapidly rotating gondola, failed to bail out and were killed by a high-speed ground impact.

At 9:07 Moscow Time Osoaviakhim-1 lifted off and soon made radio contact with the airfield. By 9:56 the aircraft reached 15,000 metres according to on-board altimeter; at around 17,700 metres its envelope expanded into a nearly perfect sphere and eventually reached static equilibrium at 19,500 metres, exactly as intended by design. The crew experienced problems with carbon dioxide absorbers, but it appeared to be manageable. Fedoseenko dumped 310 kilograms of ballast and by 10:50 the balloon passed its design altitude of 20,500 metres. This moment was later marked as the point of no return: at 20,500 metres Osoaviakhim-1 carried just enough ballast to stabilize descent speed. Further ascent and inevitable loss of hydrogen made this ballast insufficient; the only escape route was through bailing out on personal parachutes, provided that the crew could open the awkward hatch. After nearly an hour at 20,600 metres Osoaviakhim-1 climbed again, reaching 22,000 metres at 12:33 and hovered at this record altitude for 12 minutes.]

At 12:45 the crew opened the gas release valve for three minutes to initiate descent; the hot balloon did not respond as planned and travel to 18,000 metres took more than two hours. At this altitude vertical descent speed levelled at a safe and steady one metre per second. At around 14,000 metres vertical speed increased, reaching two meters per second at 13,400 meters. The lifting force of the remaining hydrogen had been reduced to 1300–1400 kilograms, while the balloon weighed an estimated 2,120 kilograms.

Between 16:05 and 16:10, when Osoaviakhim-1 descended to 12,000 metres, vertical acceleration went out of control; the balloon began disintegrating before it reached 8,000 metres. At about 2,000 meters the gondola separated from the balloon and impacted the ground between 16:21 and 16:23, near Potizh-Ostrov village in rural Insarsky District of Mordovia, 470 kilometres east from the launch site.

According to Yagoda's report to Stalin, OGPU officers confirmed the crash and reported its exact location at 23:40. The bodies in the gondola were badly maimed; Fedoseenko's skull had disintegrated, probably after impacting a tempered glass porthole. The balloon envelope fell 4 kilometres from the gondola and its fabric was quickly looted by local villagers. 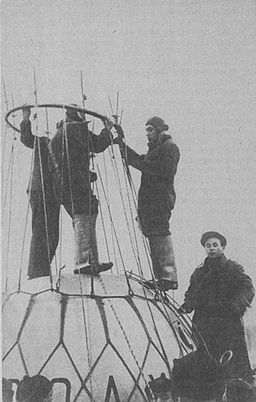