﻿﻿ ﻿﻿ Accident Royal Aircrft Factory F.E.2b , 05 May 1916
Home » ASN Aviation Safety WikiBase
ASN Wikibase Occurrence # 219049
This information is added by users of ASN. Neither ASN nor the Flight Safety Foundation are responsible for the completeness or correctness of this information. If you feel this information is incomplete or incorrect, you can submit corrected information.
Tweet
Narrative:
5.5.16: Royal Aircraft Factory F.E.2b?, 28 Sqn, RFC Fort Grange, Gosport: Stalled in turn and crashed, Fort Grange, Gosport, Hampshire. Of the two persons on board, one - Corporal Thomas Newson Giddings (aged 28) - was killed, and the pilot (Lt Browning) was injured. According to a contemporary report in "Flight" magazine (May 11, 1916 page 405 - see link #3):

"Fatal Accidents
On May 8th an enquiry was held into the death of Corporal T. Giddings, R.F.C., who was killed on May 5th. He was a passenger on a machine piloted by Lieut. Browning, when the machine turned on its side and fell 150 ft. The pilot was seriously injured, and Corporal Giddings died soon after his admission to hospital. A verdict of " Accidental Death " was returned."

According to another published source (see link #4):

Corporal THOMAS NEWSON GIDDINGS, Royal Flying Corps, husband of Ethel, home address 7 Roberts Road, Leiston, Suffolk, was serving with No.28 squadron R.F.C. based at Fort Grange. On the Friday 5th of May 1916, he was a passenger in an aeroplane being piloted by a Lieutenant Browning R.F.C. The aeroplane took off in a normal fashion and was circling the aerodrome at a height of some 150 feet, the pilot attempted a turn and in doing so the aircraft’s left wing dropped, the machine rapidly lost speed entered a stall and fell to the ground. Corporal Giddings was admitted to hospital, but sadly died shortly afterwards as a result of his injuries, the pilot, Lt. Browning was apparently badly injured but survived.

An inquest held three days later. Decided that death was accidental. But, the jury expressed the opinion “that better medical arrangements should be made at the aerodrome. So as to be able to deal effectively with such accidents.” As a result, this recommendation was sent to those in authority (it took further accidents had occurred that this was finally complied with, and a Medical Officer appointed to Fort Grange Aerodrome).

Corporal THOMAS NEWSON GIDDINGS, R.F.C., was buried on Monday 8th May 1916, and is laid to rest, Plot 48 Space 13, and is commemorated by a CWG headstone."

NOTE: The exact type of aircraft involved in this accident was not identified in contemporary reports (possibly due to wartime censorship restrictions). However, the aircraft type was definitely a two seater, as can be deduced from the above details. The only two seater aircraft operated by 28 Squadron, RFC, between November 1915 and July 1917 was the Royal Aircraft Factory F.E.2b, on home defence duties. Between July and October 1917, 28 Squadron RFC re-equipped with Sopwith Camels and was then sent to France 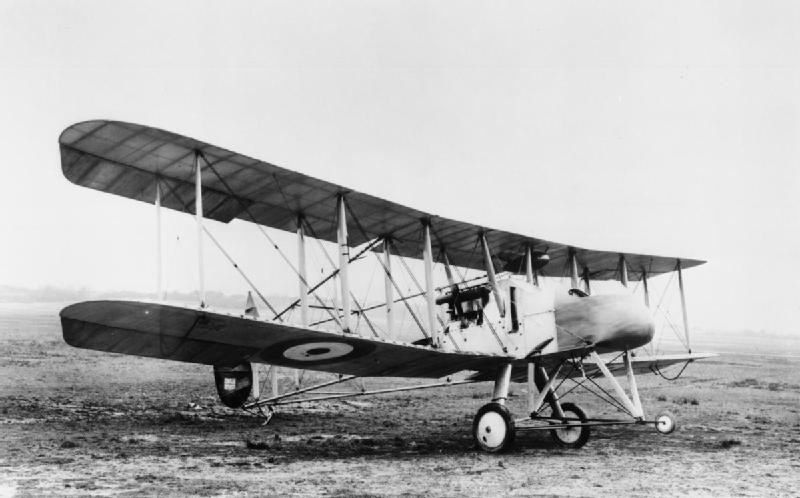 An FE 2b with a 120 horse power Beardmore Daimler engine on the ground.