﻿﻿ ﻿﻿ Incident Republic XF-84A Thunderjet 45-59475, 18 Oct 1946
Home » ASN Aviation Safety WikiBase
ASN Wikibase Occurrence # 255257
This information is added by users of ASN. Neither ASN nor the Flight Safety Foundation are responsible for the completeness or correctness of this information. If you feel this information is incomplete or incorrect, you can submit corrected information.
Tweet
Narrative:
Republic XP-84A Thunderjet Prototype 45-59475: On 11 November 1944, Republic received an order for three prototypes of the new XP-84 — known to Republic as the Model AP-23. Since the design promised superior performance to the Lockheed-built P-80 Shooting Star and Republic had extensive experience in building single-seat fighters, no competition was held for the contract. The name "Thunderjet" was chosen to continue the Republic Aviation tradition started with the P-47 Thunderbolt, while emphasizing the new method of propulsion.

The prototype XP-84 (45-59475) was completed in December 1945. In early February 1946, the No. 1 XP-84 was disassembled at the Contractor's plant in Farmingdale and loaded into a KC-97 transport and flown (as cargo) to Muroc AFB, Kern County, California. There it was re-assembled and on 28 February 1946 made its first flight of 18 minutes, piloted by Major William A. Lien. The contractor then after 32 hours and 12 minutes of general flight testing released the airplane to the Air Material Command for Phase II performance tests. These tests were conducted from 2 August 1946 to 6 August 1946 and consumed 10 hours and 40 minutes additional flight time. Results from these tests are included in Air Material Command Report TSFTE-2013 dated 6 September 1946

Subsequently on 18 October 1946 this airplane was damaged beyond economical repair in a forced landing at Shawnee Municipal Airport, Shawnee, Oklahoma while being ferried to Wright Field from Muroc AFB. Pilot William H Councill. The airplane was removed by commercial carrier to Tisker Field, Oklahoma from where it was brought to Wright Field for gun firing tests. 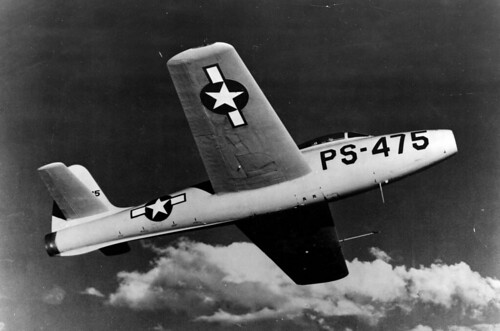 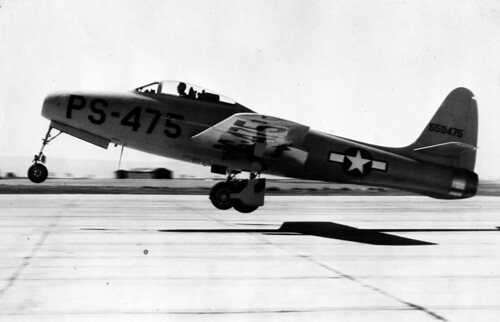