﻿﻿ ﻿﻿ Serious incident Boeing 737-3Q8 G-THOF, 23 Sep 2007
Home » ASN Aviation Safety WikiBase
ASN Wikibase Occurrence # 65200
This information is added by users of ASN. Neither ASN nor the Flight Safety Foundation are responsible for the completeness or correctness of this information. If you feel this information is incomplete or incorrect, you can submit corrected information.
Tweet
Narrative:
The Boeing 737-300 was on approach to Bournemouth Airport following a routine passenger flight from Faro, Portugal. Early in the ILS approach the auto-throttle disengaged with the thrust levers in the idle thrust position. The disengagement was neither commanded nor recognised by the crew and the thrust levers remained at idle throughout the approach. Because the aircraft was fully configured for landing, the air speed decayed rapidly to a value below that appropriate for the approach. The commander took control and initiated a go-around. During the go-around the aircraft pitched up excessively; flight crew attempts to reduce the aircraft's pitch were largely ineffective. The aircraft reached a maximum pitch of 44º nose-up and the indicated airspeed reduced to 82 kt. The flight crew, however, were able to recover control of the aircraft and complete a subsequent approach and landing at Bournemouth without further incident.

Although the commander reported the event to the operator the following morning, his initial Air Safety Report (ASR) contained limited information and the seriousness of the event was not appreciated until the Quick Access Recorder (QAR) data was inspected on 4 October 2007.
G-THOF was not subjected to an engineering examination to ensure its continued airworthiness and remained in service throughout this period.

The investigation identified the following causal factors:
1. The aircraft decelerated during an instrument approach, to an airspeed significantly below the commanded speed, with the engines at idle thrust. Despite the application of full thrust, the aircraft stalled, after which the appropriate recovery actions were not followed.
2. The trimmed position of the stabiliser, combined with the selection of maximum thrust, overwhelmed the available elevator authority.
The investigation identified the following contributory factors:
1. The autothrottle warning system on the Boeing 737-300, although working as designed, did not alert the crew to the disengagement of the autothrottle system.
2. The flight crew did not recognise the disengagement of the autothrottle system and allowed the airspeed to decrease 20 kt below Vrefbefore recovery was initiated. 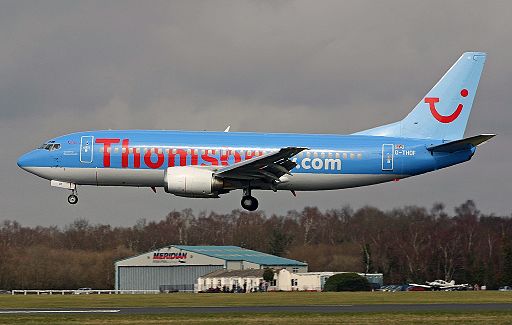